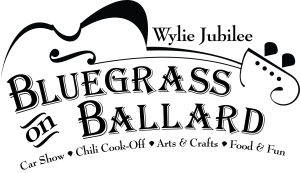 Wylie is never more wide awake than in June, when the popular bluegrass festival, Bluegrass on Ballard, fills downtown. On Saturday, June 26th, head for Ballard Avenue and Olde City Park for all-day fun, including top bluegrass bands, arts-and-crafts vendors, giant car show, a chili cook-off and great food. Play an instrument? Bring it downtown and pick and jam with other musicians on the street or in shops and restaurants, all of which will be open for business.
Bluegrass on Ballard is sponsored by the Wylie Downtown Merchants Association, City of Wylie, Bluegrass Heritage Foundation, East Fork Masonic Lodge, Wylie American Legion Post 315, and North Texas Equestrian Center.

Parking in and around Downtown Wylie

Bring a lawn chair or blanket for Music in the park

Schedule of Events (Times are subject to change):

Car Show registrations are not yet open

Thank you to all the 2021 sponsors supporting Bluegrass on Ballard in Wylie Texas!